There’s a chap who calls himself Grickle, who I discovered via his work on the Puzzle Agent games. Have you heard of recent film The Boxtrolls? He helped create the titular creatures.
One day, he tweeted the below swamp creature, with the hashtag #sketch_dailies. 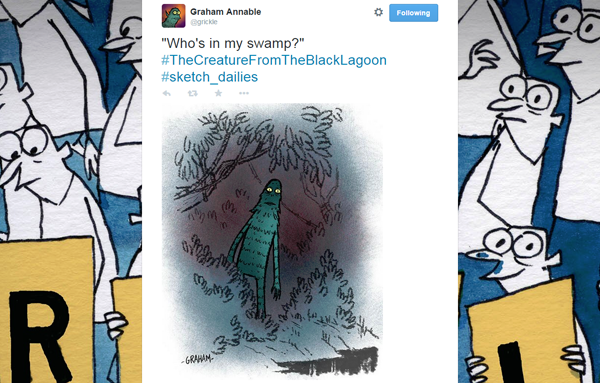 Sketch Dailies (website / Twitter) tweet out one drawing suggestion every weekday, around 5:30pm UK time. They help lead an event called Inktober, where you do one drawing every day for a month (or you can do one every two days, etc.). You can take on Sketch Dailies’ proposal, or do your own thing. Despite the name, it’s not strictly limited to ink – People use their tablets, watercolours, whatever they please.

Without further ado, these are the thirty-one pieces of fruit borne from my endeavour!

While the main boon was sketching more and getting some synapses firing, the main problem was time. I had several other things on my plate (such as rehearsals for an impending show), so this constant barrage of micro-deadlines made it a chore by the end. It didn’t help that I joined in on October 8th, pumping out two or three drawings a day until caught up. I continued to post a couple at a time.

I shared them in a few different places. In engagement my Instagram was the winner, beating Facebook, Twitter and Tumblr. Ironically, I started my Tumblr account to host these sketches, and can’t figure out if anything on there has been Liked or Shared.

Annoyingly, years ago Instagram decided you can’t preview their pictures within Tweets anymore. Sharing on Twitter did work but lacked ‘kerb appeal’: It may be worth revisiting Twitter’s built-in photo hosting.

I did get some good ideas out of Inktober. I’ll continue to check the hashtags to see what others have cooked up, and keep my sketchbook closer to hand. Copic markers and brush pens produce a good look, so i’ll have to track some down. I’ll consider taking it up again next year if my diary’s less crammed.