This month The New Bradford Playhouse put on an in-house production of Maskerade, adapted from the Terry Pratchett book of the same name (think Phantom Of The Opera with humour and witches). I haven’t been on that stage in a long time, and love the works of Pratchett, so I signed up.

My main role was one of the stagehands who are actually part of the play, so as well as spouting lines i’d shift furniture, in sight and out of sight of the audience. I had two other bit-parts in one scene each, with quick costume changes. Along with learning script, stage directions and set mechanics, I also made the show’s programme, some posters, two Papier-mâché masks for the cast, and one mask for myself. In 4 weeks. Oh, and I started a new full-time job at the same time.

Today I talk to you about the posters. Not the ones advertising the show – they’d already been completed by the time I came in – these were for dressing the “opera house” set.

I stuck gold during the research stage, finding that an online Discworld text adventure has been running since 1992. One of the locales that can be visited is an opera poster shop, which names and describes their posters for sale! A cracking start!

I found suitable pics online, traced them onto paper at A4 size, inked them with hatching, scanned them back in at 300dpi, then filled any blanks / unified the colours in Photoshop. Some images were re-created directly (The Barber of Pseudopolis), some had small tweaks (suit restyling / adding a mask for Il Truccatore), and some combined separate images (Carmine and the rose in her teeth, Aiaiaiaiada and her elephant). All had unique text and patterned borders added in Illustrator. 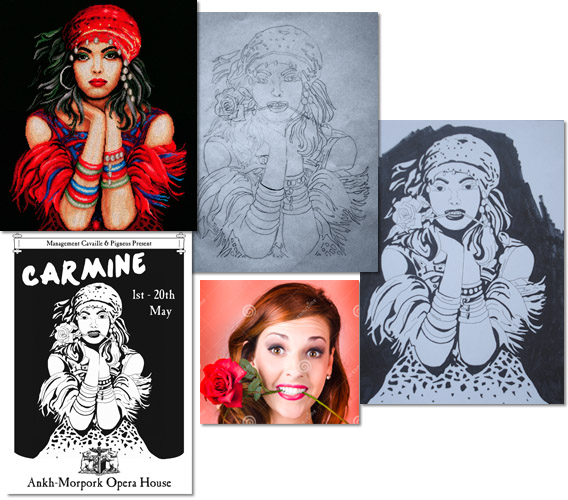 Sticking to black and white lines made it easier to do these changes, helped with clarity at a distance, reduced file sizes and kept printing costs down (important for a low-budget production such as this one). The Playhouse management told me they’re taking these points to heart.

The posters were designed to be printed at A3 size. The ones put up by the steps near the audience (below) were indeed A3, but the posters across the Cyclorama (back wall) were printed in A1.
They still looked good. In fact, they looked even better blown up.

The Playhouse have put plenty of photos of Maskerade on Flickr. See everyone (including me!) acting/gurning away, with masks or without, posters standing demurely behind them.

This post has gone on for long enough: time for an interval. You can have a good gawp at all eight posters in the gallery below, and next time i’ll share with you the pièce de résistance… the programme.