In my last post I mentioned that I had many tasks for the New Bradford Playhouse’s in-house production of Maskerade. Last time we talked posters. Today, we focus on the programme.

A 12-page booklet, the whole thing was designed to be printed in black and white on ordinary office paper. The audience got such a version, while I gifted some cast and crew members this borderless, colour cover variant. It contains the usual suspects: a synopsis, cast list, crew list, rights, a word from the director, a bit about the theatre and what’s being performed there next. A nicety is that being an internal production on a shoestring budget, there’s no advertisements. The cast pages ended up being the centre spread, which was ideal. 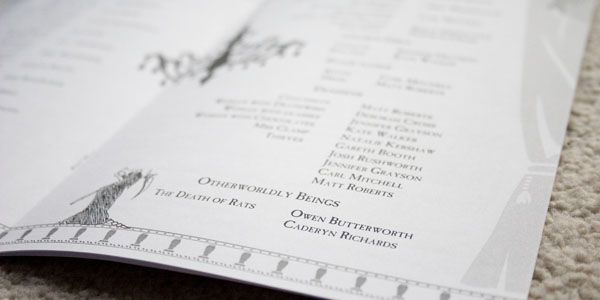 Most of the photographs were traced by hand to create an etched look, while symbols from the upcoming shows were drawn too, rather than sticking tiny poster photos in. I found the stock images used to make the show poster and recreated it for the programme cover, with a couple of tweaks and fixes.

The Joye of Snacks is a parody of The Joy of Sex [NSFW] – While I used an accurate title font, for the consideration of innocents the cover image was not re-created so faithfully (I assure you that the model in the photograph traced was wearing clothes).

The decorations in this second half differ to those in the first.

I had a crash course in Adobe Distiller and duplex printing. Pages would print in the wrong order/orientation at home, but fine at the local print shop. It was a close one – final amendments were made on the day of the first show!

Of course, you’d like to see… check the gallery below for the full pages laid out in reading order!