…said the March Hare to the girl wearing a pinafore. Lots done, and lots to do.

The Bradford University Society of Operettas and Musicals (BUSOM) hold their 24 Hour Show this month. They enter the New Bradford Playhouse on October 10th, learning that evening what musical they’ll be performing a scant 24 hours later. It’s exciting, it’s team-building, and it’s funny if the actors mess up due to sleep deprivation (in a charming way).

There’s only a handful of ways to do a logo for a 24 Hour Show, and they’ve all been done a dozen times over. Being original is hard, but worth having a crack at!

Let me annotate the above, in case anyone else comes here looking for inspiration. There’s a mix of various elements, though a lot of them were discarded quickly.

I chose the sketch from the bottom of the page.

I always think text looks nice when arranged in a block. One tip: This is much easier to achieve if the text is all-caps. The perennially stylish Rockwell quickly became the font of choice.
I played with the angles of the clock hands, their outlines and their shading. Tried a few different alignments of the ’24’. A couple of serifs were removed or altered to makes lines clearer.

A range of colour schemes were tested, and I always make sure it still works in black & white (you can set colour proofs temporarily to monochrome), and here we are.

I’ll go and help the group again this year… on the Saturday morning, as ‘reinforcements’. It was my 30th birthday recently. I needs me rest, getting on in years now, cor me back, etc.* 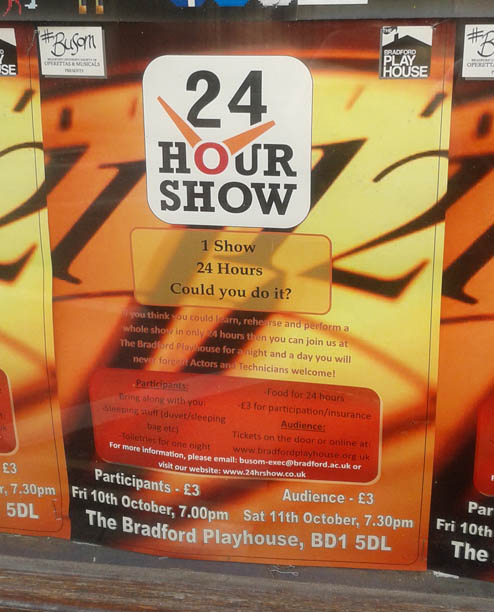